I first read about the SIIG MiniSys S286 on the Obsolete Computer Museum page for it around 1998 or so. Since then, I’d been casually looking for one of these tiny AT-compatible machines to play with. Last October, one finally turned up on a popular electronic auction site. 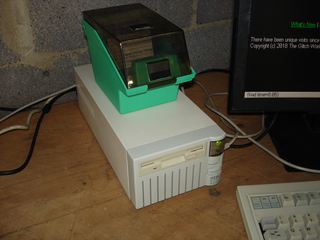 It’s barely visible in the above picture, but mine arrived with a little shipping damage: the smoked plastic cover over the power and disk activity LEDs got cracked. Oh well! It doesn’t affect operation. It also came with its original NiCd “barrel battery,” which did affect operation: it had of course leaked, though not badly. I cleaned up the affected area of the motherboard, gave it a wash, and sent it through the hot air drying rack. I’d wanted to replace it with a 1/2AA holder and a Tadiran 3.6V hermetically sealed lithium thionyl chloride battery. These batteries are non-rechargeable, and must not be recharged. Rather than put a diode in series with it, I traced out the charge circuit and discovered that the old NiCd was simply trickle-charged through a resistor: 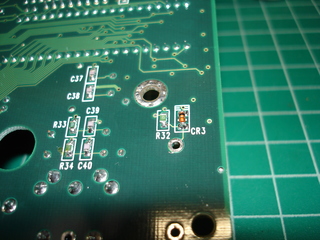 R32 is a 470 ohm (marked 471) surface mount resistor, found on the bottom of the S286’s motherboard, under the area where the NiCd barrel battery was located. I simply removed the resistor, and double-checked that charge voltage was no longer present on the positive pad for the CMOS battery. Success! A 1/2AA cell holder with flying leads was used to replace the NiCd, the leads were soldered directly to the pads. The holder was mounted to the side of the drive cage using double-sided tape, which should provide easy access for eventual changeouts: 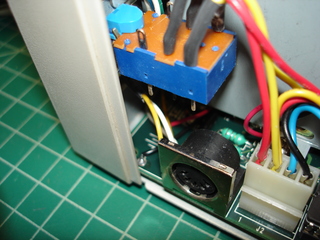 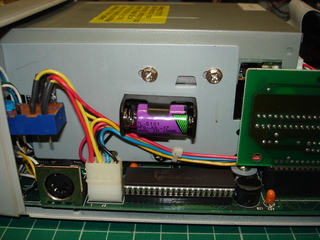 After replacing the CMOS battery, the machine holds time and CMOS settings as it should. My S286 arrived with a Seagate ST351A/X hard drive. The ST351A/X was the last 40 MB drive to be produced, and seems to be quite reliable – I have had a number of them, both when they were relatively current, and within recent years. The drive worked fine, but I felt that leaving it in the S286 was a waste: the “A/X” part of the model number indicates that it can be used with XTA drive controllers, as well as regular ATA IDE controllers. XTA is the original XT-IDE interface, a native 8-bit IDE supported by the drive itself, not to be confused with modern XT-IDE controllers! Some PCs have internal controllers for such drives, including several popular models in the Tandy 1000 line. So, the ST351A/X was replaced with a 128 MB PQI industrial Flash module, and will move on to a system with XTA.

Obviously, the single 16-bit ISA slot was intended to hold an Ethernet card! I chose an Intel EtherExpress 8/16 as I have a number of them with 10baseT, 10base2/thinnet, and AUI connectors. It fits nicely in the provided space: 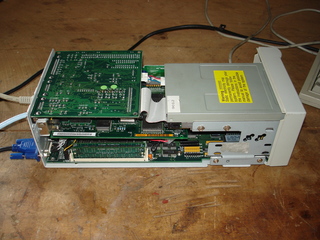 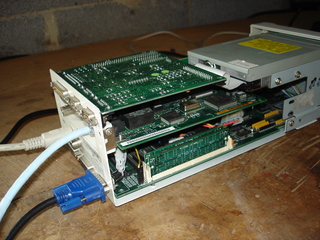 I’m using the Crynwr packet drivers for the card, along with Mike Brutman’s mTCP package. mTCP is a really great project, it provides many useful tools for use under DOS, including clients for IRC, HTTP, FTP, Telnet, SNTP, and others. Additionally, I installed the Arache web browser. I was surprised to find it had recentish development work on it, I had originally used this brower on a 386 around 1997 or 1998. Here’s a shot of Arachne loading the glitchwrks.com homepage: 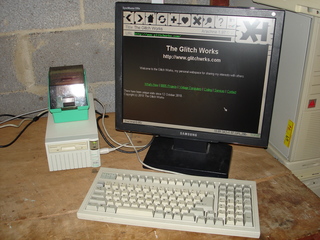 And, of course, if you’re going to load webpages on a piece of vintage hardware, one must load Hack a Day’s Retro Edition: 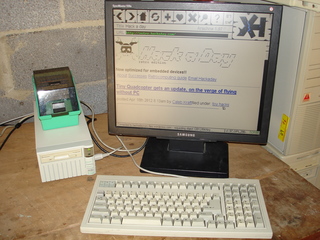 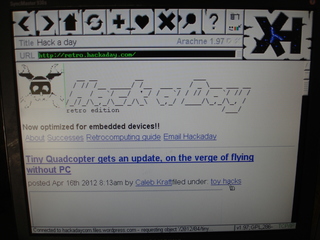 I’m happy to have finally found one of these little machines. It will be put to use as a small utility PC, running some DOS utilities that I use frequently which require a hardware serial and/or parallel port. You may also see it connected to irc.slashnet.org, in #vc from time to time!