This VA Linux FullOn 2x2 rackmount server was the first “proper” server I owned: things before it were just consumer PCs. It’s not the first rackmount computer I’d owned, that was probably the 4U AT chassis I’d bought in high school and put an AMD K6-II system into. The FullOn 2x2 started shipping in late 1999, and prices started around $2900. This particular machine was purchased in 2005 or so, well past the point of having become obsolete. It was a leftover from the dot-com bubble, supposedly the result of a cleanout of some storage locker from a now-defunct business.

I remember shipping costing more than the machine. No rack rails were included, but I only had a two-post rack anyway. This machine probably ran Slackware 9.x or 10. I’d switched over to Debian for a while, but that wasn’t until we’d gotten satellite Internet at the farm – apt-get being excruciating on a 56K dialup connection!

This machine was used primarily as a learning tool. I’d never experimented with “real” server hardware of my own. The four 18 GB SCSI drives allowed me to try different filesystems and software RAID levels. Having them in hot swap trays allowed quicker/easier OS experimentation, as the root disk could be changed out or pulled and set aside to avoid potential wrecking. It was multiprocessor, a novel thing to me at the time. It ended up being a testbed for things I didn’t want possibly wrecking important machines, sort of a “staging” machine for home hacking.

During summer 2022, I rediscovered the VA Linux server at my parents’ house while we were rearranging part of the shop. It had been living in the basement, stored under some old camping gear. Being flat and sturdy, it was on the bottom, directly on the concrete floor. It acquired a fair bit of dirt and rust: 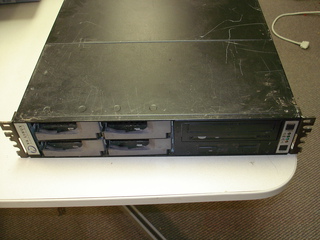 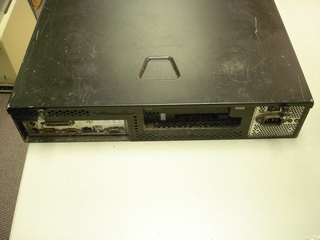 The ports area was particularly rusty: 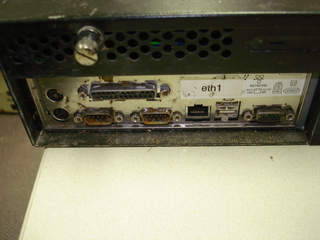 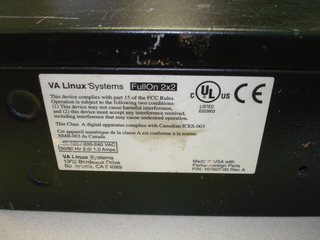 I decided to try and clean the old server up. Even if the motherboard was trashed from exposure to moisture, it was standard ATX and could be replaced. Opening it up, I discovered things weren’t too bad on the inside: 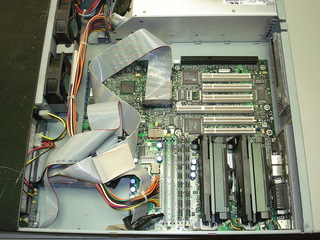 The rusting on the chassis work must really have been from concrete damp, not a water leak or something. The insides were a bit dusty, but pretty clean for a server that hadn’t been opened in so long! No mouse houses or anything. Next, the drives were pulled, and here we see the likely reason this server was taken out of use: 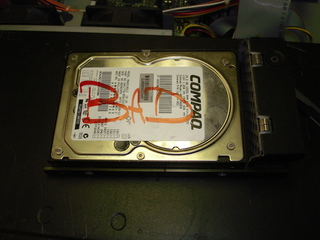 Two of the drive sleds had disks (one being the failed disk pictured above), two did not. I remember stealing drives from this system once it was no longer in use, one ended up in my SGI O2, which Sark now has. Like the rest of the chassis, the trays were quite dirty. Fortunately, I’d saved the drive mounting screws and taped them inside. 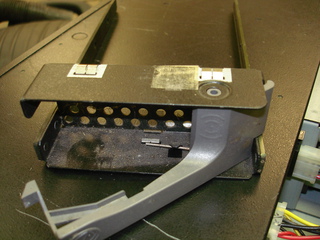 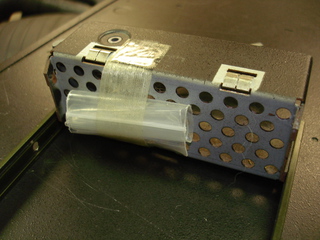 The sleds look a lot like those used in Rackable Systems servers, I wonder if there’s any connection?

Since the machine was getting a complete cleaning and going-through, everything was removed from the chassis, including the SCA backplane, CD-ROM/floppy mounting, motherboard, and power supply. Here’s the chassis, completely empty: 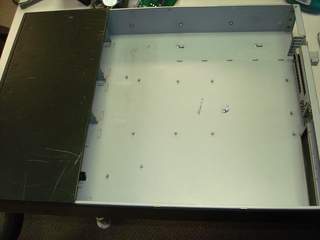 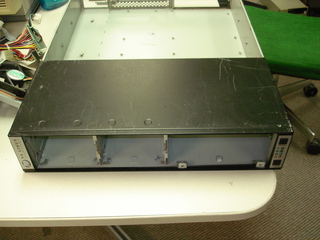 Everything was thoroughly cleaned, rust spots were removed with a stainless steel brush, sticker residue was removed, rusted fasteners were replaced. The original slot blanks were in bad shape and were replaced with some from inventory: 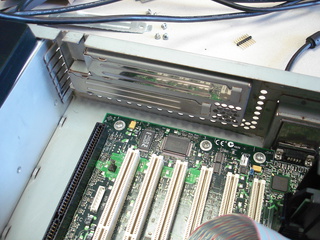 With the system cleaned, the power supply was opened and checked for failing capacitors, excessive corrosion, etc. Everything looked good, and the fans turned freely with no wobble or bad bearing feel. I started with reinstalling the motherboard and power supply, figuring I should check them out first before finishing reinstallation. Handily, someone stuck the Intel motherboard’s info sticker inside the top cover: 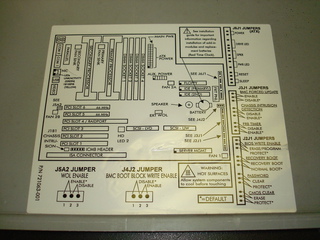 I always liked that Intel gave you stickers for the motherboard layout and port designations!

This server has its original pair of Intel Pentium III 550 MHz processors, in Slot 1 packaging. These are Katmai cores, with 512 KB L2 cache. The CPUs and memory were the final things installed: 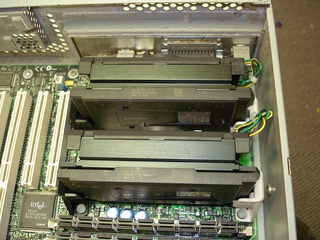 After reassembly, the power supply was load tested with Matt D’Asaro’s AT supply tester and an ATX -> AT adapter. Everything was fine, so the motherboard was plugged in, a monitor and keyboard attached, and powered up…nothing! No beeps, nothing on the display. Time for the POST card: 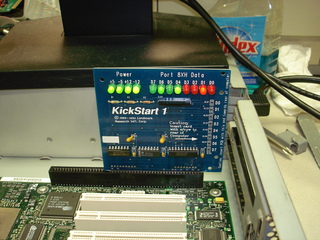 I had to use my small Landmark KickStart 1, rather than one of the larger cards with more features, due to the case construction of the server. A riser would be required for an ISA card that extends to the normal full rearward length and/or has a bracket. The KickStart 1 showed signs of life, so I decided to try moving the RAM to the other two slots. Success: 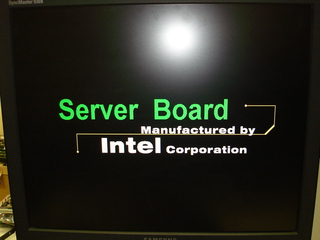 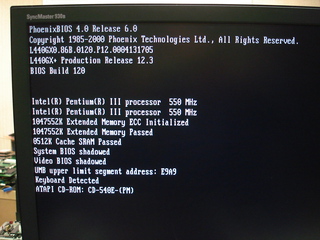 After that, memtest86+ was run on the system to verify memory. All systems 386 and newer get the memtest86+ treatment before any serious hacking begins…lessons learned from years of fighting infrequent memory issues in surplus equipment! 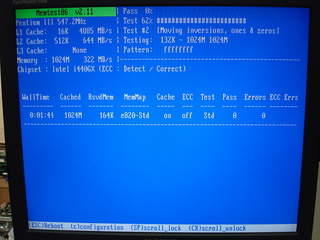 That went well, so I purchased another pair of 512 MB PC100 registered ECC DIMMs from a popular online auction site. This would bring the system up to its maximum 2 GB configuration, which would’ve been huge and very expensive in 1999! The expanded system spent a night grinding away at memtest86+ and finished with no errors: 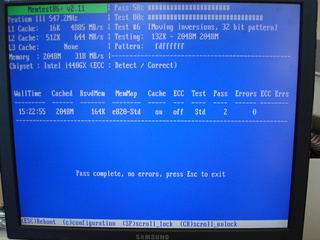 With that, this old server was ready to be used for…something!

I’ve never had rack rails for this server, it didn’t come with them and I wouldn’t have cared back then anyway as I had a two-post relay rack. It was mounted either using a rack shelf, or by placing it atop another server that was front mount capable. I’d apparently cut features off of the rack ears to allow securing it to the two-post rack: 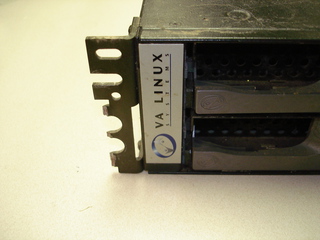 For now, the system is sitting in the bottom of an equipment rack in the shop, mounted using an old set of APC UPS rails: 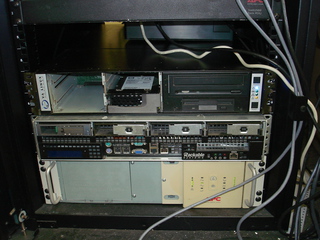 If anyone has a set of rails, or knows of a compatible set, contact us and let me know! I’d like to be able to mount it properly, but this is fine for now.

I took the opportunity to hook up the Kill-a-Watt and figure out idle and loaded power consumption: 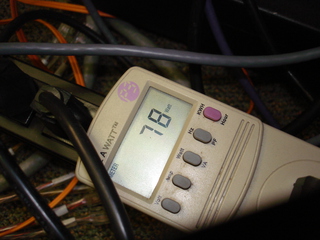 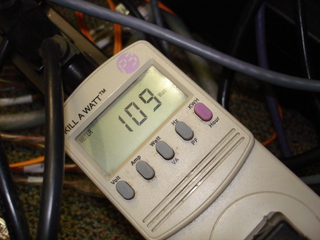 Not exactly lightweight, given the performance-per-watt! Still, this is low enough that 24/7 operation would add less than $10 to the monthly power bill, so if the server ends up being really useful, I won’t feel bad about leaving it on.

A dual 550 MHz Pentium III with 2 GB RAM isn’t exactly going to run big modern workloads, but it can be useful for some applications. We could sort of use a dedicated machine on the “old stuff network” to act as a boot server, and that’s the current role this machine is going to attempt to fill. It’s the sort of role that could be filled by a small VM on one of our VM hosts, but we do try to keep the old stuff off of the hardware that’s actually used for day-to-day business purposes.

I decided to install NetBSD, since many of the things we’d like to netboot will be running NetBSD, and it’s a fine operating system for the role anyway. That feels a little wrong, on a system produced by a company with “Linux” in the name, but only a little! A new 300 GB SCA drive was plugged into the first slot (lower right slot, which is SCSI ID 1), and NetBSD/i386 9.3 was installed from a burned CD.

The install went as expected: everything was identified and supported, even the SAF-TE features of the SCSI backplane. The onboard Ethernet card is an Intel 10/100 chipset, which has excellent NetBSD support. The machine feels fairly quick from the command line, unlike running modern NetBSD on, say, a sun4c SPARC system.

Currently, the following services are being run on the “old stuff” network:

Here’s the dmesg output for the system:

I’m pretty happy with the NetBSD install. I will probably add at least one more 300 GB SCA drive and do a software RAID1 mirrored pair: while the drives are “new,” they’re really more like NOS, and were made quite a few years ago! This machine won’t be storing anything super important, but it’s not worth the cost to deal with a downed machine from a single disk.

With four drive trays, this system can actually support quite a bit of storage, given that data will usually come and go over 100 mbit Ethernet at best. It will likely end up being the fileserver for the “old stuff” network, as well as the boot server.