This is the S-100 Computer Products 32K Static RAM board: 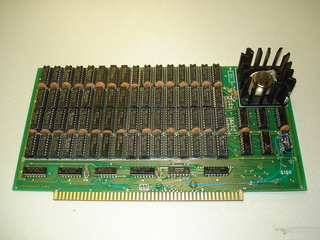 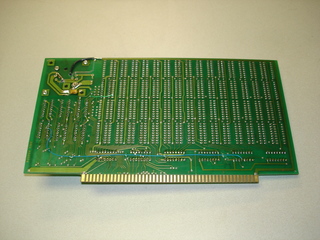 I’ve had this board for quite a few years, but never got it working reliably. Fortunately, it did come with the manual. It’s a pretty basic 32K SRAM board, notable only in that they managed to pack a bunch of 2114 1K x 4 SRAMs onto a single S-100 card! The main problem that ended up in the board being shelved turned out to be mostly caused by bad sockets in the decode/buffering circuitry. Fortunately, sockets in the RAM array were higher quality gold-plated dual wipe sockets, so I didn’t have to resocket the whole board. Two of the SRAM sockets were damaged, and required replacement.

Aside from bad sockets, this board proved a little difficult/confusing to troubleshoot: there is enough parasitic capacitance that empty sockets will sometimes, sort of hold data! I’d started with the board minimally loaded with a single pair of 2114 SRAMs and was having all sorts of issues getting the test system to come up. The TDL Zapple monitor was being used for debugging, as the system this board is destined for uses a TDL/CDL SMB-II. Zapple sizes memory non-destructively by XORing the contents, writing it back, XORing again, and writing again. The S-100 Computer Products 32K SRAM board appeared to be actually returning valid data during the sizing process, causing Zapple to locate its stack and variables in RAM that didn’t really exist!

During minimal testing, the regulator on the board got pretty hot. Sixty-four 2114 type SRAMs, even the low-power variants, are a big load for a single regulator. The original design uses a PNP power transistor and a wirewound resistor to boost the capacity of a regular old 7805 type regulator, but heatsinking was entirely insufficient. This is the original regulator hardware and heatsink: 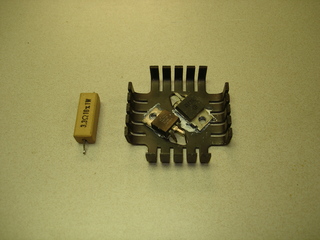 The small heatsink, 7805, and PNP transistor were replaced with a single uA323 5V regulator in a TO-3 package. This regulator is specced for 3A service, which this board is pushing. The datasheet for the particular regulator used says it won’t shut down until at minimum 4A draw, as long as the heat can be dissipated. I scavenged a large Wakefield cast aluminum heatsink from a dead DEC power supply, which can be seen in the first picture at the top of this page. Holes were drilled through the S-100 board and some power traces cut and scraped back. Ground pour under the regulator was also scraped back to prevent shorts. Here’s a picture of the back after the regulator rework:

The Wakefield heatsink is rated for around 10W dissipation without forced air cooling. With the board up on a S-100 extender, the heatsink gets hot, but not so hot that it can’t be safely touched, which was the case with the previous arrangement. With even minimal airflow, it is more than adequate.

The board was further modified to change its address decode: this board was being fixed up for an IMSAI that already contained 16K of SRAM addressed from 0x0000 - 0x3FFF. The IMSAI’s owner did not have a manual for the 16K card and didn’t want to re-address it. A few cuts and jumps, and a piggybacked 74ACT00 changed the 32K board’s addressing to 0x4000 - 0xBFFF. 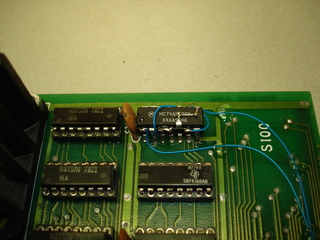 This board was burned in in my test bench IMSAI with a Cromemco ZPU running at 4 MHz. We use the Lifeboat Associates’ Rasmussen memory test program for final RAM testing, running under CP/M 2.2. We’ve found it to be very thorough at catching intermittent RAM faults.