I acquired my Fairchild F8 Kit in a large lot of industrial scrap. It was in poor shape, having been thrown in with scrap, and two of the 40-pin ICs had been scavenged, likely prior to it being thrown in the scrap heap. The reset and toggle switches were both busted off, as were a few capacitors and resistors. Fortunately, the mask-programmed 3851A PSU (Program Storage Unit) IC was still in the board, so I decided to try and revive it.

I replaced a number of decoupling capacitors, a resistor, the two broken switches, and found replacements for the missing 3850 CPU and 3853 SRAM interface. I happened to have a white ceramic 3850 CPU salvaged from a piece of broken avionics gear. The 3853 SRAM was sourced from one of my usual IC suppliers. I was able to find the assembly manual on archive.org – it states that it is for the Veras Systems F8 Kit, but apparently this kit is identical to the Fairchild F8 Kit. The schematic can be found on BitSavers. 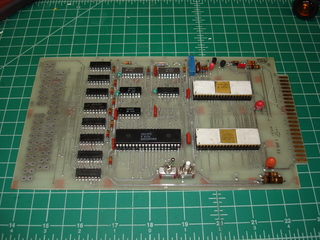 This still didn’t work for me, so I built a small MAX232 circuit on a bit of breadboard and connected it to the TTL level I/O pins used for serial I/O. Still no luck! I could tell the board was trying to bootstrap, as it arrived at the correct addresses, visible by probing the address lines on the end of the board opposite the 22/44 connector. No amount of twiddling of the system clock trimmer would produce the correct sign-on prompt, though it did produce output. I suspected bad RAM, so I desoldered all eight 2102 1K x 1 bit SRAMs and replaced them with sockets: 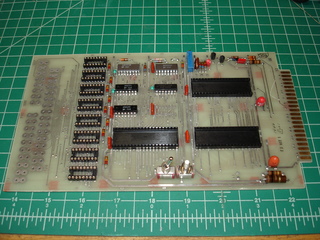 Even with a known-good set of 2102s borrowed from one of my other systems, I was getting the exact same symptions. I suspect this was due to the TTL serial data needing to be inverted on at least the transmit line; however, I never got to that point. I re-read the manual and discovered I’d misread the schematic: PRINTER OUT was supposed to be pin M on the 22/44 connector, but I’d misread it as 3! I reconnected the current loop interface to the VT220 and was greeted with an operational monitor: 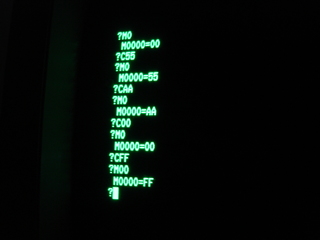 Correct wiring to the VT220 current loop port is as follows:

Replacing the RAM did result in an interesting discovery, for anyone doing diagnostics on a F8 Kit in the future: no working RAM is required for the FAIR-BUG monitor to sign on and work properly, it appears to use the F8’s internal scratchpad registers exclusively for its operation. No need to chase bad RAM if FAIR-BUG doesn’t sign on, and the monitor itself can be used to isolate which RAM chip is bad, if there is in fact a RAM fault.

I ended up guessing the adjustment of the system clock oscillator: I twiddled the adjustment pot while watching the VT220 screen, and noted approximately where the FAIR-BUG question mark prompt started to be printed incorrectly. I picked a spot in the middle and left it there. I haven’t verified frequency of the main clock yet, but it seems to be happy with this choice. It’s possible to strap the system for console operation at 300 bps instead of 110 bps, apparently the system clock was close enough for this as it worked correctly at 300 bps with my VT220.

For now, the Fairchild F8 Kit gets used with my Lambda triple-voltage bench supply: 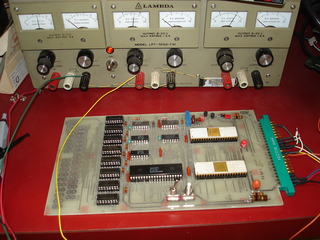 I will likely build it a more permanent home with its own self-contained power supply, but for now, it lives on the benchtop! I’d like to find a white ceramic 3853 SRAM interface to go with it, if anyone has one they’d like to part with, please contact us.