A recent equipment pick-up included quite a bit of Sun hardware, ranging from rack-mounted server equipment to a number of “lunchbox” form factor SPARCstations. Among the smaller machines were two SPARCstation IPC systems. Unlike the rest of the SPARCstations, the IPCs failed to power on, with only a click and a chirp, a typical “overloaded switching power supply” sound. The motherboards were verified using a power supply from a SPARCstation IPX, which is newer and faster, but uses essentially the same power supply. Both IPC power supplies were disassembled and found to have badly leaking capacitors.

The IPC power supply is fairly easy to disassemble. Split the system enclosure, remove the tray that holds the floppy drive and hard disk, and slide the power supply slightly forward. It then lifts up and out. There are two screws that secure the supply’s top cover. There’s also a small wire clip, I found it easier to press the release tab and leave the clip on the wires rather than trying to remove the wires: 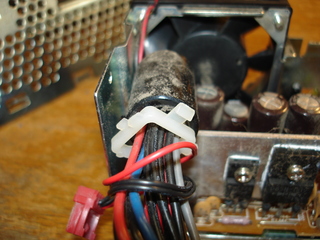 The main switching output filter capacitors were indeed very gunky, having discolored the board on both the top and bottom, and lightly corroded a few of the wire links. One supply used Chemicon capacitors, while the other used Elna. Both are good brands, and the capacitors were 105 C rated low ESR types, leading one to wonder if they were counterfeits, or just defective. Here you can see the dark discoloration around the base of the capacitors, and a black gunk around some smaller leaded components: 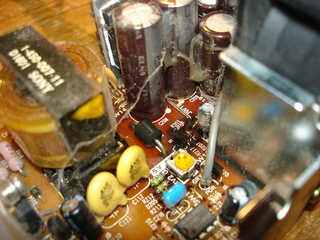 The Sony power supply board is single-sided, which makes desoldering very easy, even if you’re using a spring-loaded solder sucker or desoldering braid. It’s easiest to desolder all capacitors at once and pull them out together, as some of them are glued. I suspect only the low ESR capacitors (tall, skinny, high-value units) were leaking, but replaced all capacitors since I had the supply open. Here’s the board with capacitors removed, and a closeup of the leaking low-ESR capacitors: 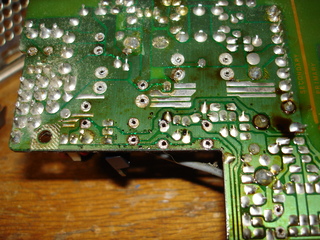 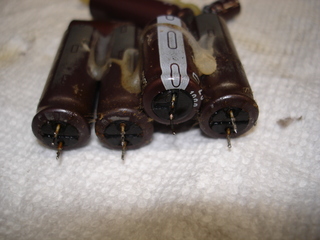 As seen above, there’s black residue on the bottom of the board from leaked capacitor electrolyte. The board required washing with hot, soapy water and drying in the forced air drying cabinet. It’s critical to remove the old electrolyte from the board, as it will continue to damage components and traces if allowed to sit. Note that it was not necessary to replace the line-side filter capacitor (largest capacitor, near the AC inputs), it appeared to be in excellent condition and was not near the electrolyte damage. Here’s a picture of the board after cleaning and drying, you can see that the substrate was permanently discolored by the electrolyte: 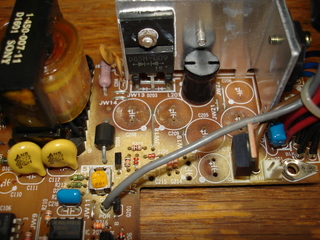 I ordered new replacement capacitors for all electrolytic capacitors on the board, except for the line-side filter capacitor, even though the smaller standard capacitors looked OK. The following is a table of the component numbers, capacitor values, and Nichicon replacements I used:

The substitutions above are made with consideration to physical size, ratings, and electrical characteristics. For instance, it’s OK to use a low-ESR capacitor in place of a standard grade capacitor, as with C211. A higher voltage rating for the same capacity is also OK, as for C214 and C215. Since I was recapping two supplies, I placed my order for QTY 10 on all values, which is typically the first level of price break with components suppliers.

I stuffed all capacitors at once, and soldered them all at once. It’s easiest to insert the capacitors closest to the heatsinks before inserting those farther away. Polarity and part numbers are marked in the silkscreen legend on the circuit board. In the following pictures, the capacitors have been stuffed (installed, and leads bent to keep them in place), and then fully soldered with the leads trimmed off. Note that the new capacitors are often smaller than their replacements: 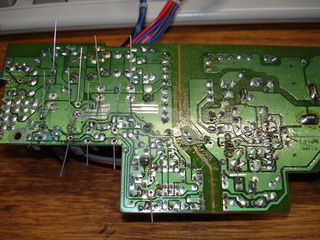 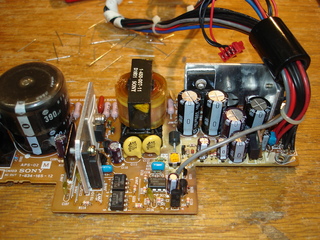 The circuit board was reinstalled in the enclosure, all wires reconnected, and the supply was re-assembled: 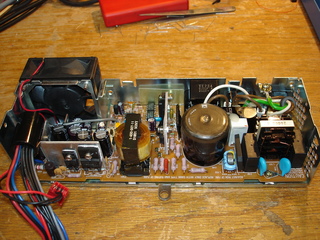 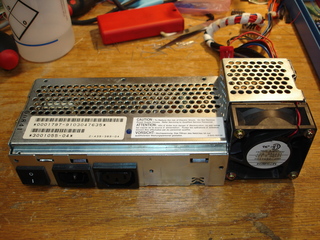 With the power supply reinstalled in the SPARCstation IPC chassis, it was time to power-on test the machine. If your NVRAM battery is dead, be aware that it will take a very long time for the system to come up at first! The Type 5 keyboard I was using beeped and blinked various diagnostic codes, the hard disk spun up, and I was finally greeted with the Sun boot screen. Typing b disk (the NVRAM was in fact dead) booted into an old SunOS 4.1.4 install, which couldn’t find the NIS server it wanted to talk to: 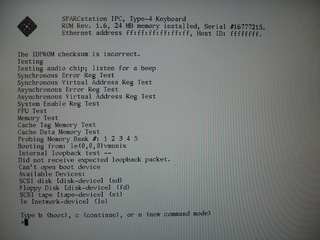 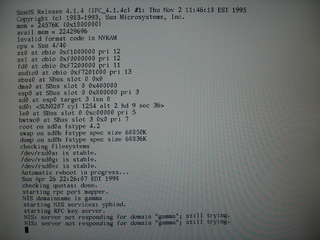