Modern Classic has uploaded an XT-IDE rev 4 kit assembly video to YouTube! His process is basically the same sequence we use to assemble XT-IDEs in the shop. The video covers all of the basics and provides a more visually-oriented guide than any of the forum posts or writeups. While this video is for the XT-IDE rev 4, the technique is applicable to both.

The XT-IDE rev 3 has been superceded by the XT-IDE rev 4, which is a general improvement in IDE compatibility and ease of assembly, but remains 100% hardware compatible.

When another request for an assembled XT-IDE or full parts kit popped up on the VC Forums, I responded that I had a few XT-IDE rev 2 boards available, if anyone wanted to buy them for what I’d paid for them. More people wanted boards than I could provide, so I decided to take the opportunity to revise the XT-IDE and do a small run of boards, kits, and assembled units.

The XT-IDE rev 3 board is a descendant of the original XT-IDE project from N8VEM/vintage-computer.com. Having assembled a number of boards from both previous runs, I had a few modifications and updates in mind to make the board easier to assemble and configure. As with the original project, the board is completely open source, licensed under the GNU GPL v3.0. It was designed with KiCad, a completely open source cross-platform EDA package.

Above is pictured a typical XT-IDE rev 2 board as I usually assemble them. I’ve had very few (perhaps zero?) requests to populate the built-in UART, and most hobbyists seem to be using a CompactFlash card or industrial Flash module with the board. As such, the Molex connector, UART and support circuitry, and three-pin power header were easy removals. Additionally, I wanted to clean up the routing and go back to using DIP switches as with the original N8VEM XT-IDE. I find them easier to document and less fiddly than a pile of jumpers.

Mechanically, the hole spacing for the Keystone 9202 card bracket were fixed (they were off on the original, rev 2 corrected by making the still-off holes larger), IC footprints were switched to use obround pads, and jumper header holes were sized for the detent headers I use in XT-IDE assembly. Unnecessary resistors were eliminated, instead using spare elements from resistor packs or directly tying lines to +5 and GND as appropriate. Ceramic decoupling capacitors were switched from radial to axial bead types, which provide better access to socketed ICs when sockets are used.

In re-routing the board, I decided to orient all ICs, resistor packs, and DIP switches vertically with pin 1 up. Routing was completely done by hand. Minimum trace width is 0.012”. There’s a ground pour on the solder side of the board, and all power supply routing was done with 0.050” traces.

As many of the jumper settings, switch settings, and IC positions are documented in the silkscreen as possible. All IC, resistor, and capacitor location silkscreens contain the value within the component outline. Component numbers are placed outside the component outline so they’re still readable once the board is assembled. All switches are positive sense; that is, an ON enables the labeled feature.

With plenty of feedback from the VC Forums and #vc on irc.slashnet.org, I ordered a small run of prototype boards. These boards were HASL finished only, since adding hard gold plating for the edge connector was too expensive for a prototype quantity: 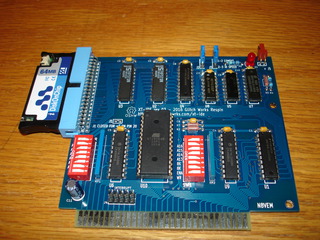 I ran the boards with blue solder mask – to me, it provides better trace contrast than green, and I like the color anyhow! The prototype board almost completely worked as built. When importing the original rev 2 schematic and board layout into KiCad 4.0.1, I didn’t realize that KiCad had swapped which pin was the cathode for LEDs, in order to conform with IPC standards. This has the effect of making the LED silkscreen appear to be “backwards” on the board. Otherwise, the rev 3 board booted a 64 MB industrial Flash module just fine!

With the LED orientation issue resolved, another redundant resistor removed, and a few tweaks to the layout, it was time to do a production run! I wrote a simple preorder system in Ruby using Sinatra, tacking it on to my site services project for the time being. Since the ISA connector was going to get selective hard gold plating, I removed the unused pins from the connector to save on plating costs. 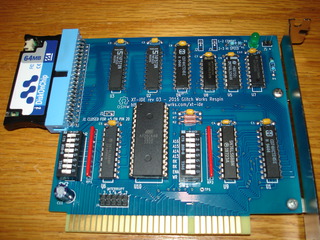 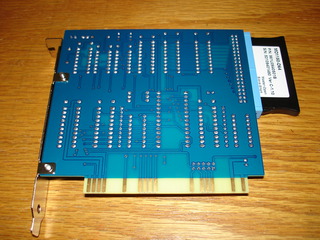 Success! The board worked perfectly! We started filling preorders for boards, kits, and assembled units. Kits were packed up in antistatic bags and conveniently fit three in a USPS Small Flat Rate box: 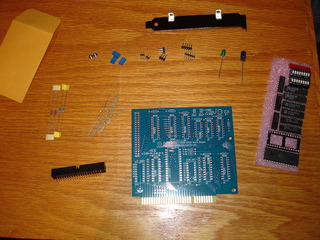 The rev 3 boards take me about an hour each to assemble, clean, and test, plus a few hours of burn-in time. I assemble them with Kester organic core solder, which uses an organic acid flux instead of rosin. This flux is water soluble and requires washing, or you end up with somewhat conductive and capacitive gunk on the board after a few weeks. The assembled boards apparently fit perfectly in a bamboo dish drying rack: 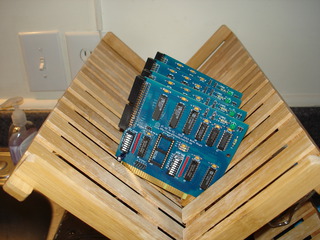 From there, the boards go into an oven that ramps up to 170 °F and holds for 5 minutes. This drives all moisture from under the ICs. After they cool, EEPROMs and jumper shunts are added, the EEPROMs are programmed, and the boards are left to burn in for a few hours. So far, no failures!