Since acquiring my Challenger III I’d wanted to find a prototype board for the OSI bus. Having a protoboard would let me build a debug board as I had for the S-100 bus, to assist in repairing the nonworking boards left over from the combination of my Challenger III boards with those that my boss had. I could also build a more reliable 48K + 8K all-in-one RAM board using a modern high density static RAM rather than a pile of SEMI4200 static RAMs. Unfortunately, original Ohio Scientific 495 prototype boards are hard to come by – I know of one other original in existence (also being used as a RAM board!), and Mark Csele had remarked in an email that they were probably unobtainable.

A lack of 495 boards resulted in vintage solutions like this: 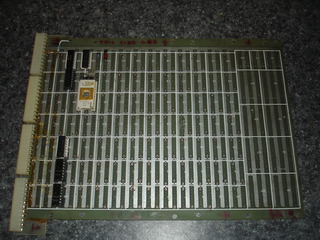 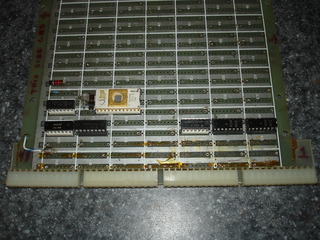 This is a vintage homebrew ROM board I picked up from a popular online auction site. As you can see, a small single-sided board was hand etched to carry the KK-156 connectors, which was then glued to a large chunk of prototype board. Unlike my attempt, this one appears to hold on pretty solidly. I was thinking about replicating the small carrier board when I came across an actual OSI 495 board for sale: 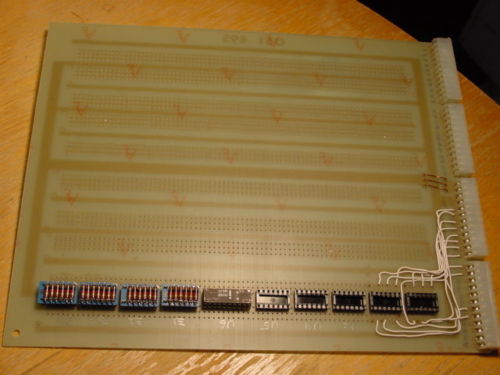 It was in good condition with very little of the prototype space used – it appears the previous owner never got past laying down sockets and some basic wiring. My plan was originally to turn this into a combination debug/RAM board, but in talking with Grant Stockley about duplication of S-100 boards, I decided to instead clone the board. I used Grant’s recommendation of scanning services from Mile High Test Services, a Colorado-based shop specializing in high resolution conversion of PC board art into CAD files.

My board went off to Mile High Test Services and was scanned as a single-sided job. I specified no clean-up, to preserve the original “look and feel” of a board laid out with tape and acetate: not all lines are perfectly straight, holes are off-center, et c. I received a set of Gerber files, which I was able to manipulate with KiCad and re-export as Gerber files: 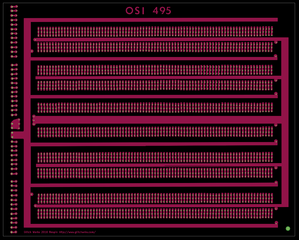 This worked out pretty well, and the board went off to the manufacturer for a small prototype run. I ran the board as single-sided, no plated-through holes, no solder mask, no silkscreen – just like the original. I did add a bit of text in the bottom-left corner indicating that the board was a reproduction: 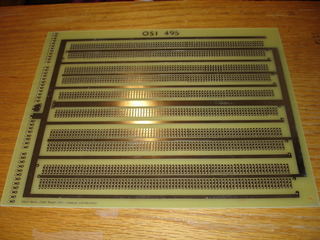 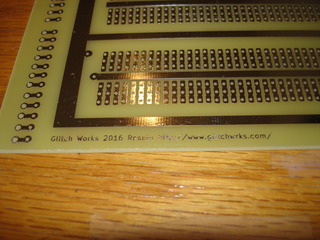 Aside from one small flaw in a power trace (doesn’t affect functionality), it turned out great! I ran a small number of these boards as a test. So far, there hasn’t been a lot of interest in doing a larger run; however, if you’d like to purchase one of the initial boards or put your name in for a purchase on a larger run, let me know via the contact form.