I came across a lot of three unusual S-100 boards on a popular electronic auction site – two 16K and one 8K static RAM boards, not particularly dense or fast, but…made by IBM! According to the seller, they were built in the late 70’s at IBM’s Advanced Systems Development Lab in Los Gatos, California. They utilize IBM FSU – “Functional Storage Unit” – static RAM modules. Why would such a thing even exist, though? 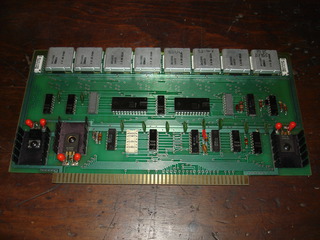 I contacted the seller to see if he had any knowledge of the origin of the cards. He had this to say:

At the IBM Advanced Systems Development Lab in Los Gatos Ca. we built a hardware simulation engine to verify the VLSI chips that were being designed. Imsai 8080s were used for the housekeeping functions on the engine. The engine itself was quite large. At the time, the FSU ram was the highest in density available at a reasonable price. Therefore, the S-100 cards were designed and fitted into the Imsai. Of course, a few extra cards were built for those of us that our own home Imsai systems. The overall system worked well as inputs to the simulation could be quickly changed and a new simulation run. Unfortunately, the logic to be simulated had to be first compiled on an IBM 370 which took quite a bit of time. If an error was found the logic had to be recompiled and the engine reloaded.

The designer of the cards was a Tech. named Gary McGill. 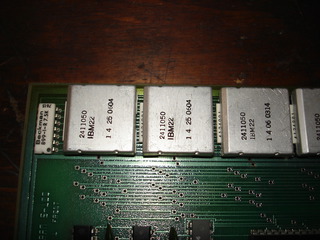 FSU static RAM is apparently internally-developed static RAM in a type of IBM IC packaging: the aluminum-topped chip carrier is reminiscent of IBM’s earlier Solid Logic Technology, or SLT, used in the 1960’s era System/360 mainframes. I’ve been unable to find much information on the particular RAMs used on this board. The above pictured 1K x 9 modules have a part number of 2411050, while the 2K x 9 modules have a part number of 5120745. If anyone has more information on these, or spare parts, please let me know!

Fortunately, these boards came with the short but complete manual, available here, as well as a blueprint copy of the schematic, available here. The blueprint is legible, but very faded, and was extremely difficult to scan.

If anyone has more information on these boards, or happens to have one, I’d be interested to hear about it! Use the contact link at the top of the page to get in touch.