In the summer of 2008, while working as an assistant in a warehouse full of electronics surplus, I discovered two Cromemco Z2-D enclosures. One of them contained a Morrow WunderBuss, a Cromemco ZPU, and an Ithaca Intersystems 64K Dynamic RAM board. In 2009, I returned to the facility connected to the warehouse with a new employer, the actual owner of the two Z2-D systems. Soon enough, the WunderBuss backplane was on my desk, lashed up to a Lambda bench supply, and I was in the process of getting the ZPU to boot from a 2716 on a protoboard.

After getting the ZPU reliably executing code from ROM, purchasing and repairing an IMS 8K Static RAM board from Erik Klein’s Vintage Computer and Gaming Marketplace, and writing enough ROM routines to fully test the setup, I purchased a Cromemco 4FDC from a popular online auction site. It was supposed to be “fully working,” as with most things one purchases online… 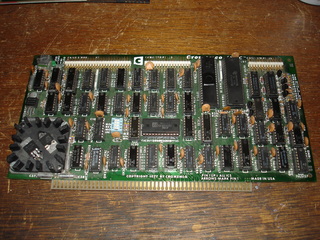 The 4FDC was Cromemco’s first floppy controller, intended for their System 3 computer. It’s a single-sided, single-density controller based around the Western Digital WD1771 disk controller. The board also includes a TMS5501 UART, which is used as the default console port, and a 2708 PROM socket for the boot ROM/monitor, RDOS. The 4FDC was designed to drive 8” Persci 277 voice coil drives, or Wangco Model 82 5.25” drives. RDOS, aside from providing standard monitor commands, can read and write tracks and sectors to any connected floppy drive. While it’s an interesting and versatile board, it doesn’t seem to be popular with the vintage computer crowd.

Often, the suggestion found in historical Internet posts and active forums or mailing list discussion amounts to, “the 4FDC is primitive, give up and buy a 16FDC, or better yet, a 64FDC!” This may be valid advice, based on your needs and goals. If you’re trying to maximize capacity or compatibility with other systems, the 4FDC probably isn’t the way to go. Both later controllers are indeed superior to the humble 4FDC; however, they’re also more expensive. Fortunately, the 4FDC isn’t quite as esoteric as one might be led to believe.

The following summarizes my findings regarding common wisdom about the oddities of the 4FDC:

One of the most popular arguments against the 4FDC is incompatibility with standard floppy drives. There’s some truth in this: the 4FDC was indeed designed for operation with 8” Persci 277 voice coil drives. Persci drives are expensive and unreliable, so they’re less than optimal for a practical, usable system. The 4FDC manual specifies Wangco Model 82 5.25” drives as an option as well. This particular model is somewhat uncommon, and certainly more expensive than a Shugart-compatible 5.25” drive. It’s commonly believed that these particular drives are required because the 4FDC requires a drive with an external data separator since the WD1771 doesn’t include a data separator…well, not quite!

The Western Digital WD1771 disk controller does in fact include a FM (single-density) data separator on-chip. Being an early integrated circuit design, the data separator is not particularly high-performance. This is referenced in the WD1771 datasheet, page 17:

As a result, Cromemco decided to use the data separator present on Persci 277 drives. This turns out to be less of an issue than expected, as many early 8” floppy drives (the Shugart SA-800, for example) include a FM data separator. But that still leaves the requirement for 5.25” drives that include a data separator…right?

This one is flat out incorrect – while the WD1771’s on-board data separator is indeed disabled for 8” disk access, the MINI/MAXI select line enables it for 5.25” disks. Any standard 40-track 5.25” floppy drive will indeed work perfectly with the 4FDC, provided the drive is strapped appropriately. I’m currently using a pair of Tandon TM-100 drives with my 4FDC, which successfully formats, reads, writes and boots floppy disks. Perhaps the lower data rate of the 5.25” drives makes the on-board WD1771 data separator acceptable; in any case, it seems to work.

The 4FDC shipped with RDOS 1. There are some subtle differences between RDOS 1 and 2.x – if you’re attempting to use Dave Dunfield’s RT, the first you’re going to discover is that SM (Substitute Memory) terminates with a CR in RDOS 1, whereas it progresses to the next memory address with RDOS 2. Entry is terminated with a period in RDOS 2. This breaks syntax compatibility between the two versions.

Additionally, it seems the hardware between the 4FDC and 16FDC is different enough that RDOS 2.x is, in my testing, unwilling to work with the 4FDC. I’ve made several attempts to load RDOS 2.x into memory addressed at 0xC000 with no success.

Seeing as how attempts to load RDOS 2.x had failed, it’s not unreasonable to be concerned over compatibility with later versions of CDOS. Fear not, CDOS does not depend upon RDOS! Examining a dump of CDOS 2.58 will show that the first four bytes of track 0 switch the RDOS ROM out of memory, if the *FDC controller is configured to allow it. I’ve used CDOS 2.58 with my 4FDC without problems.